The Essence is a Dutch rock band formed in 1984. The Essence signed to Midnight Music after a year of gigging. In 1986 the collaboration resulted in the release of their debut album “Purity” preceded by the 12” single “Endless Lakes”, which were both received very well, especially in Holland and Germany. A track very popular with the radio- and club-DJ’s was “The Cat”, which was remixed and released as a second 12”. 1987 saw the release of the follow-up album “A Monument of Trust” and the single “A Mirage”, a catchy tune that made the top 10 in Spain. It was then, that The Essence started to tour Europe extensively, building up a strong and faithful following in amongst others, France, Germany, Spain, Switzerland and the UK.

The popularity of the band continued to grow with the release of the third album “Ecstasy” in 1988. The videos of the singles “Only For You” (1989) and “Like Christ” (1990) got regular airplay on MTV. The group recorded their fourth CD “Nothing Lasts Forever”, a powerful and dark concept album, released November 1991, making its way to an ever growing following around the world, including Japan and the USA.

From that time on, the band started touring where they frequently played Spain, Italy, Germany and the UK. Band members also started working on outside projects that varied from writing & producing to playing with other bands. Collaborations with DJ’s from over the world gave a new meaning to several of The Essence songs, amongst others Italian DJ Giancarlo Carone who did various remixes of “Only for You” in 2005.

Neels Sound Engineering is since 2014 the manager of this band, we also produce, mix and engineer there new album. 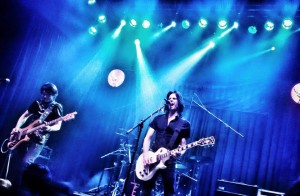